I went to the Bahamas to visit my friend Susan, who married a Bahamian. Yes, a Minnesotan married a Bahamian. Anyways, because we stayed with his family the whole time, for the first five/six days we didn’t do typical “tourist stuff”. Those days, for me, were the best part of the trip, although that could be because my sister and brother were there too….
We went camping on another island, Rose, for three days. Really roughed it, and it was a blast, long nights, lizards, no toilets and all!
__________________________________________________________
We were on a boat, skipping over calm water. The wind whipped my hair and I could taste the salt spray from the bright blue water. The sun shone, and in places the water appeared darker. We didn’t talk much on the short ride out from the island to the reef.
Brett killed the engine and we drifted a short ways while Susan pulled out the rope and threw over the anchor. I helped her feed the rope until it hit bottom. Everyone passed around masks and snorkels, found flippers that fit and talked all the while.
The sun glinted off the edge of the boat as I peered into the reef. Although eager to get in the gorgeous water, I didn’t want to be the first one in out here in the unknown. Hey, there could be sharks… Eventually everyone had gear, and one by one we sat on the side of the boat, sliding into the water backwards.
The cool water closed around me, as did the silence. Suddenly I felt alone. I looked around for the others, and started kicking. The reef was both intriguing and beautiful, and a little bit eerie. I could vaguely hear noises of people kicking their flipper clad feet, and the sound of my own breathing through the snorkel tube.
I smiled at Ange, the best I could while still holding my teeth around my snorkel, and waved. Both of us popped our heads above the surface and pulled the snorkels out.
“Did you see this?”
“Look at that!”
“Woah, did you see that piece of coral?”
“This fish!”
The coral was gorgeous, and way more intricate than I had imagined. Brain coral, that looked like a maze carved out of rock, and pretty purple sea leaves covered the bottom of the ocean, interspersed with fire coral, that Brett told us we’d better not touch. Brightly colored fish swam in schools all around us.
Amy popped up to the surface and pointed to a large brain coral. “Woah! Did you see that thing down there… someone has been down there carving!” Needless to say, she still hasn’t lived that one down.
Sucking in a big breath I dove down towards the edge of the reef and the deeper water, getting a close up look. I ran out of air and pushed myself up towards the surface, blowing hard to get the water out of the snorkel. Amy and I posed for an underwater picture.
Back under the water Brett waved us over, pointing out a weird fish that looked almost like a sea cucumber swimming upright. Above water he explained it was a relative of a sea horse called a pipe fish.  I think we had a million and two questions for him, “What’s this? What’s that?” and “How does the coral survive? What kind of fish is that?” and the all-important one, “What sharks do you have here?”
Brett had two spears and shooters, but none of us tried. Being used to Minnesota I was a little scared that if I did end up miraculously spearing something it would be something out of season. Apparently everything is fair game in the Bahamas.  We watched him spear a blue jack and a crawfish, both of which we ended up eating for dinner. Pretty soon we started to tire out, and headed back to the boat. I sat soaking up the warm sun, enjoying how your muscles feel after a good swim.
“Derek, what did you find?” Kara says with her camera running.
“A butt! And Dory.”
“Ahh! He touched the butt!”
Mark pulled the crawfish out of a bucket by its long antenna and wiggled it in front of Kara. “Ahhhh!!  Get that away from me! That’s not on Nemo!”
After warming up we moved to a shallow, sandy part of the ocean. Four of us got back in the water to drag behind the boat, and look for sand dollars and conch shells (fyi, it’s really pronounced conk). I grabbed the yellow rope and held on next to Susan. The water rushed by as we gazed at the rippled sand.
Things didn’t go so well, although we found a lot of sand dollars we only found one conch, and it was just the shell. Every time Brett would get the boat moving one of us would see something and drop off, and then we’d have to start all over again. When the boat got moving faster, I would have a hard time keeping my mouth around my snorkel and it would fill up with water. I would come up choking, desperately trying to fix it without letting go. It didn’t work.
Finally, after too many times starting and stopping, starting and stopping, and a bucket full of sand dollars, Brett told us, “NO MORE sand dollars OR sunshine shells. You can eat conch… you can’t eat sand dollars.” (We ended up going hungry that night. Well actually, we ended up eating hot dogs instead.)
Susan was heartbroken over all those sunshine shells she was passing over. “I kept seeing gorgeous ones… and I couldn’t get them!”
Eventually we all ended up shivering and back in the boat, watching Brett wake board. And laughing at Susan’s driving.  We drove back to the island we were camping on for a long, cold, windy night. Haha, but that’s another rad story….. 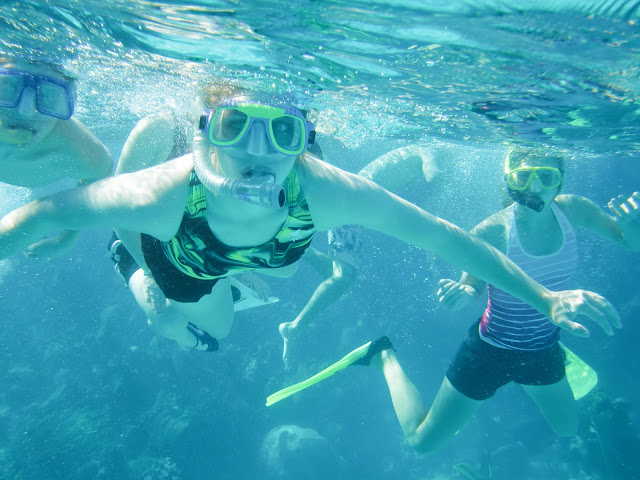